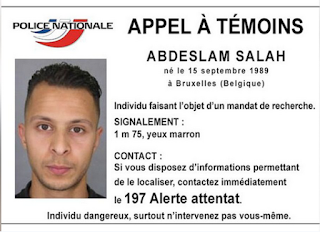 French jets began bombing ISIS targets in eastern Syria tonight, according to France's defense ministry, hours after the country's national police launched an international manhunt for a "dangerous" suspect wanted for involvement in the Paris attacks.
The French Ministry of Defense said it targeted a command post and a terrorist training camp, dropping 20 bombs on ISIS’s de facto capital in Raqqa, Syria. The first target included a command post, jihadist recruiting center and a weapons warehouse, the ministry said.
Ten French fighter jets were launched simultaneously from the United Arab Emirates and Jordan in an operation carried out in coordination with U.S. military command, the French Defense Ministry said.
Activists in Raqqa tweeted that water and power was cut off after the airstrikes.
Hours earlier, the French national police said it was seeking Salah Abdeslam, a 26-year-old French national who was born in Brussels, for involvement in the attacks.
Officials told ABC News he is believed to be the gunman who led the team shooting a people in restaurants and bars. Police picked up his trail in a suburb just outside Paris after they found a car used in the attack, and they believe he then took a different car to Brussels.
En route he was pulled over at a traffic stop, but not detained, and made it across the border. Authorities later seized that car in Belgium.
Officials said he is one of three brothers: One of the three died during the attacks and another was detained in Belgium.
The attacks in Paris that left scores dead and hundreds injured were prepared in Belgium and the suspects received help in France, French Interior Minister Bernard Cazeneuve said today.
A raid took place today in the Bruxelles-Ville neighborhood of Brussels in connection with the Paris attacks, a Belgian official said.
Paris Attacks: Grief and Heartbreak Around the World
ISIS Claims Deadly Paris Attacks, 'First of the Storm'
American Tourist in Paris Describes Hearing Shooting During Attack
Iraqi Foreign Minister Ibrahim al Jaafari said that, prior to the attacks, sources in Iraqi intelligence obtained information that some countries, France in particular, would be targeted by ISIS. In a statement in Vienna, Jaafari said Iraq notified both the U.S. and Iran.
Police have detained several people in France and Belgium, including two men in Belgium who officials say were directly involved –- indicating authorities believe at least 10 people played a role in the complex assault.
Some of the men under arrest had been tracked to Belgium after being spotted on surveillance tape in a rental car purportedly used in one of the shootings. One car apparently used in the attack was discovered today with "several" Kalashnikov rifles, the Paris prosecutor said.
Two of the deceased gunmen have been identified by French officials: 29-year-old French citizen Ismail Mostefai and another man whose photo appears on a Syrian passport. However, authorities are carefully examining the authenticity of the passport, which shows the man slipped into Europe through Greece, then Serbia and Croatia in early October and then eventually to France, according to European officials.
Two of the suspects who died during the attack were French nationals living in Belgium, officials revealed today, as the investigation into who was behind the devastating six-part attack on French citizens continues.
One of the dead attackers lived in the Brussels suburb of Molenbeek, where raids took place Saturday, and a second attacker lived in the broader Brussels area, a Federal Prosecutor spokesman told ABC News.
Both were French nationals, a Belgian official said.
Belgium’s Interior Minister said today the situation in Molenbeek, which is at the center of the investigation, is out of control.
Belgian Prime Minister Charles Michel said Molenbeek was a "giant problem," according to Belgian TV, and the government should "focus more on repression."
More than 500 Belgian nationals have left to fight in Syria, according to a Belgian database. Belgium has provided the most foreign fighters in Syria, per capita, of any European country.
Three teams of suspects carried out six separate attacks, officials said, before seven attackers were killed by detonating their explosive belts.
The death toll in the Friday night massacre has reached 129, officials said. French Prime Minister Manuel Valls said today that the bodies of 103 victims have been identified while 20 to 30 victims remain unidentified.
At least 352 people were injured, including 99 people in critical condition.
As the investigation into the attack continues, the country remained on edge, and French police advised people to stay home as much as possible.
A black car suspected to be used by the gunmen was found six miles from Paris, in the suburb of Montreuil, French news agency AFP reported. A prosecutor's spokeswoman confirmed to ABC News that a car with several Kalashnikovs was found this morning in Montreuil, but further details were not immediately available.
The U.S. will contribute to the investigation, as five FBI agents have left for Paris, a law enforcement official briefed on the situation told ABC News. The FBI's specific role was not immediately clear.
Pope Francis this morning expressed his "deep sorrow for the terrorist attacks," saying, "to the President of the Republic of France and all the citizens I offer the expression of my deepest sympathy."
"I am particularly close to the families of those who lost their relatives and to those who were injured," he said. "Such barbarity leaves us shocked and we wonder how can a human heart conceive and organize such horrible acts, that have shocked France and the whole world."
In memory of the victims, the 28 member states of the European Union will join France in a minute of silence Monday at noon Paris time.
Public cultural establishments, including museums and theaters, are expected to reopen Monday afternoon in Paris and its surrounding suburbs, said the Minister of Culture and Communication.
Get real-time updates as this story unfolds. To start, just "star" this story in ABC News' phone app. Download ABC News for iPhone here or ABC News for Android here.
Posted by Unknown at 15:33 Nessun commento: 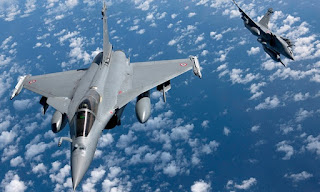 French fighter jets launched their biggest raids in Syria to date targeting the Islamic State’s stronghold in Raqqa just two days after the group claimed coordinated attacks in Paris that killed more than 130 people, the defence ministry said.
“The raid ... including 10 fighter jets, was launched simultaneously from the United Arab Emirates and Jordan. Twenty bombs were dropped,” the statement said, adding that the mission had taken place this evening.

Latest coverage as hunt continues for network behind Isis attack that left 129 people dead
Read more
The operation, carried out in coordination with US forces, struck a command centre, recruitment centre for jihadists, a munitions depot and a training camp for fighters, it said.
A defence official was quoted by Associated Press as saying the strikes were ‘massive’ and had destroyed two jihadi sites in Raqqa.
“The first target destroyed was used by Daesh (another Arabic acronym for IS) as a command post, jihadist recruitment centre and arms and munitions depot. The second held a terrorist training camp,” a ministry statement said.
In the aftermath of the attacks on Paris, the French President, François Hollande, said terrorists strikes were an “act of war” on France, “organised and planned from the outside”.
He said the attackers wanted “to scare us and fill us with dread”, but warned France’s retribution would be swift and unflinching.
“We are going to lead a war which will be pitiless. Because when terrorists are capable of committing such atrocities they must be certain that they are facing a determined France, a united France, a France that is together and does not let itself be moved, even if today we express infinite sorrow.”
Information from inside Syria suggests the bombings had cut water and electricity supplies.
Activists in Raqqa have said the bombings have caused “panic” in the city.
Posted by Unknown at 14:31 Nessun commento: 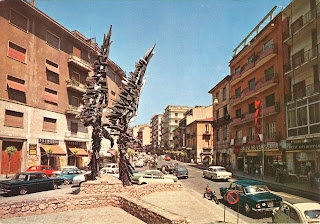 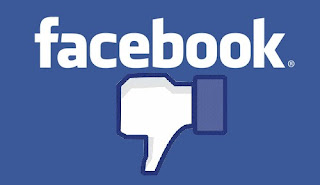