ABOUT ROME I AM OPTIMISTIC WE CAN TO WON THE RETURN MATCH AND GO AHEAD...WE BEAT ARSENAL 2-0 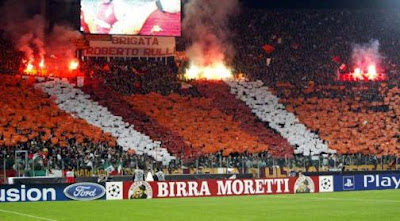 Philippe Mexès (left) concedes the penalty from which Robin Van Persie scored (©Getty Images)
AS Roma defender Philippe Mexès admitted the Italian side were relieved to have escaped with just a 1-0 defeat at Arsenal FC on Tuesday, but warned the Gunners to expect a different test altogether in Italy in a fortnight's time.

Positive thinking
Luciano Spalletti's visitors lost the first leg of this UEFA Champions League first knockout round contest to a Robin van Persie penalty – awarded for a Mexès foul on the Dutchman – but it could have been worse for Roma, who saw Nicklas Bendtner and Emmanuel Eboué miss clear opportunities to inflict greater damage. Mèxes said: "Obviously we are very disappointed with this defeat, but at the same time we are very positive we can turn it around because 1-0 away is nothing."

'No fear'
The French international, who had "no complaints" about the penalty award, added: "Arsenal play good football but they are not unbeatable. In Rome it will be a completely different match in which we will have to push forward and play without fear, which we did not do in the first part of the match tonight. In the end a penalty decided the outcome but the score is still positive considering all the other chances they had to add to their lead. The first leg is over now and we have to start in a different way in two weeks' time, playing at home with our fans behind us. At our ground we will give everything to reach the next round."

Riise relief
The feeling in the Roma camp afterwards was that their performance improved as the game went on. "We showed at the end of the second half that we could have got more out of the game," said Mexès. Yet while John Arne Riise drew a save out of Manuel Almunia in the closing stages, it was no more than Marco Motta had done in the first period. Riise himself acknowledged the Serie A outfit were lucky to have survived several scares in their own penalty box, notably when an unmarked Bendtner failed to profit from scoring chances in each half. "We didn't play at all well tonight and I can't believe Bendtner missed those goals because normally he'd have scored," said Riise.

'Lucky'
In the group stage Roma avenged a 1-0 loss to Chelsea FC in London with a 3-1 home success, and the Norway defender added: "The tie is still wide open because we're just 1-0 down and that's very different from being 2-0 down. If you look at the chances we created and the chances they created in the end we were probably lucky to have come away with just a one-goal deficit. "
Posted by Unknown at 10:01 Nessun commento: 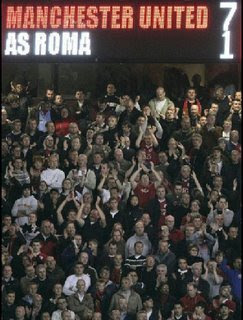 Frustration: Cristiano Ronaldo reacts as Manchester United miss a chance Photo: PA
So nearly 11 Special Ones. So nearly Manchester United’s night. With the near faultless Michael Carrick leading the way, the European champions gave Jose Mourinho’s disappointing Inter a masterclass in the art of possession, particularly in the first half. United left the San Siro goalless only because of Inter’s superb goalkeeper, Julio Cesar.


Carrick and company arrived back home in the small hours with plenty to declare. They could declare that, on this evidence, Premier League sides are more watchable than Serie A. They could declare that Inter’s much-vaunted striker, Zlatan Ibrahimovic, still has to justify his rave local reviews. They could also declare a real pride in this mature display, in the way Carrick, Ryan Giggs and Darren Fletcher worked triangles around black-and-blue shirts. Mourinho’s men chased shadows in red.


When Ferguson first began guiding United in the European Cup in the mid-Nineties, they were regularly punished, particularly before crowing Italian crowds, for laxness in possession. Ball lost. Italian counter. Goal. Game over.


Not now. Ferguson has taught his players how to keep the ball, a strength that served them so well here. Carrick embodied this expertise at ball-winning and distribution in front of the watching England manager, Fabio Capello. The likeable Geordie now looks like he feels he belongs on the grandest stages.


But United must also declare a frustration. They needed to turn all that first-half possession into something more substantial. Cristiano Ronaldo could have laid claim to the match-ball by the interval, although much credit must go to Cesar, who rescued his team from humiliation.


The European champions also need Wayne Rooney to focus his adrenalin rushes more maturely when unleashed from the bench. Brimming with pent-up energy, he seemed on a mission to win the game on his own, and was rightly booked for a clattering challenge on Esteban Cambiasso. England versus Argentina in club clothes.


Surprise had rippled through United fans before kick-off on hearing that Rooney was on the bench. During a lively kick-in, Rooney showed little after-effects of that hamstring problem. Yet Ferguson has pulled off such shocks before, notably with a similar midfield against Chelsea and any Doubting Thomases were swiftly silenced. Gaffer’s cracking up? No chance.


Ferguson knew what he was doing, deploying a 4-2-3-1 formation to protect a back-four lacking Nemanja Vidic. “Wayne had only played one game in seven weeks,” explained Ferguson, who needed the “fantastic” Dimitar Berbatov to start to give United an aerial presence at defending set-plays.


Mourinho still admitted his “surprise” at Rooney’s initial omission. “He is a fantastic player but he was injured for a few weeks,” he added. “Maybe 'the Boss’ [Ferguson] decided to give him a rest.
”

Mourinho’s words have been more entertaining than his team. Following his pantomime-cum-sermon on the eve of the game, more than 80,000 had thronged into this famous arena, anticipating drama of the highest order. In keeping with the theatrical theme, the “Edinburgh Festival Reds” were present, clearly resting before their August acting duties. Football’s pre-gentrification generation were more fully represented, typified by a banner that read: “United, Kids, Wife – In That Order”.


United were certainly in good order. When Patrice Evra and Jonny Evans wasted the ball just before the interval, gasps of disbelief almost sprung from the terraces. How United reached the break without a goal was a travesty of sporting justice, pure and simple. Inter became so disheartened that their reserve keeper, Francesco Toldo, was even cautioned for dissent.


Every man in red responded to Ferguson’s instructions and his call to arms. Fletcher, impressively focused after the distressing news of his partner being robbed at knife-point, joined Carrick in shielding the defence while Giggs, Ronaldo and Park Ji-sung pushed on to support Berbatov.


Ronaldo was relishing the task, the European Footballer of the Year possibly stung by all Mourinho’s claims that Ibrahimovic was in his league. So inspired was he in the early stages, that Ronaldo twice went close with free-kicks, and in between troubled Cesar with a header.


United were composure personified. Ferguson had clearly ordered his players to dictate the tempo, taking the sting out of the crowd. Inter’s fans had been so pumped up for the European champions’ visit that even United’s kit-man, Albert Morgan, was treated to some choice Italian invective.


Carrick and Giggs were immense, rarely risking losing the ball, always threatening something special. Carrick dribbled through the middle, a sinewy run of growing menace, his enterprise curtailed only by a trip from Javier Zanetti. Giggs failed to exploit the free-kick.


Inter had pursued Giggs’s signature all through the Nineties, and their players tried in vain to catch him here. Racing on to a sublime Carrick pass, the Welshman was denied only by Cesar.


Still United dominated. Cesar saved another Ronaldo dead-ball special. Then the World Player of the Year glanced a header just wide, again following a fine cross from the ubiquitous Giggs. United were rampant and Inter were relieved to make the break intact.


Emerging from the tunnel, Ferguson predicted to television reporters that there “will be a reaction from Inter” and he was right. Mourinho had lifted his players, and strengthened his defence by removing the hapless Rivas Lopez.


Briefly we saw the Inter who lead Serie A. Briefly Ibrahimovic showed some class. Adriano shot wide. The warning was clear: Inter were waking. The Italians screamed for a penalty when Rio Ferdinand challenged Adriano, who dissolved on impact like a melon in a blender. Contact was minimal and referee Luis Medina Cantalejo dismissed Italian appeals.


Park and Giggs briefly threatened away goals yet the best chance fell to Cambiasso, who missed from close range. The second leg promises fireworks.
Posted by Unknown at 09:51 Nessun commento: 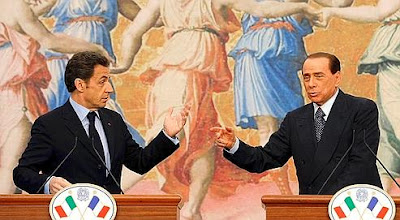 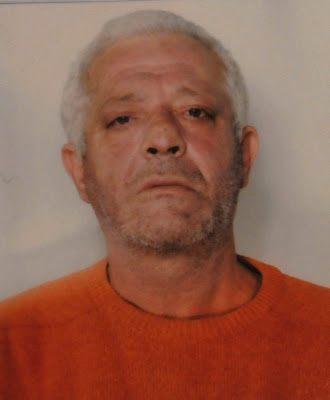