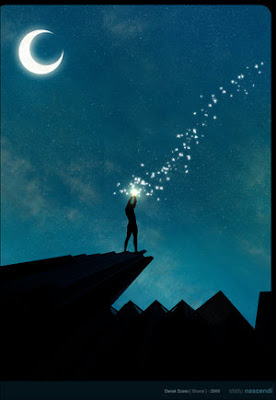 Posted by Unknown at 16:21 Nessun commento:

WHY ITALY IS GOING AT VOTE TODAY...AND TOMORROW 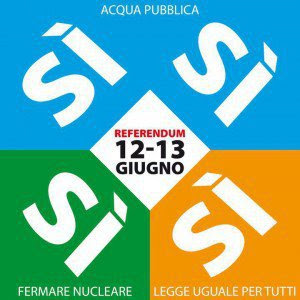 On 12 and 13 June Italy to the polls
referendum vote for four QUESTIONS BUT
Two public QUESTIONS ARE MOST IMPORTANT: water, nuclear, and such failure here is the text of the questions

THEFT IN THE NUCLEAR FIELD ENEL
15:35 - On 12 and 13 June will be four referendums on which the Italians are to vote. The electoral office of the Supreme Court ruled, in fact, that the amendments made by the government regulations on nuclear power does not preclude the celebration of the popular consultation. This question should therefore be added to the other three on water and such failure. Here, then, the four questions on which the Italians are to vote.

Question 1. Public Water Referendum. Repeal reliable service to private operators (red card).
The question asks to speak about the repeal of Article. 23 bis (twelve paragraphs) of Act No. 133/2008, under which the management of water services may be entrusted to private companies through tender or a mixed public-private partnerships. We must vote YES 'if you are against the privatization of water and against the management of water services by private individuals. We must vote NO if you are in favor of the current legislation.

Question number 2. Public Water Referendum. Repeal calculating fees according to the logic of "market" (yellow card).
You must choose whether to repeal paragraph 1 of Article 154 of Legislative Decree n. 152 of April 3, 2006 only so much on "the adequacy of return on investment." We must vote YES if it was against the rule which allows the profit (not the recovery of operating costs and investment, but the gain of business) in the provision of good drinking water. We must vote NO if you favor the current legislation which allows this gain.

Question number 3. Nuclear energy Referendum (gray card).
Here it must be expressed on the repeal of Decree Law No 25 June 2008 112 and enacted into law on August 6 of that year on the creation on the territory of new nuclear power plants. We must vote YES 'if you are against the construction of nuclear power plants in Italy. We must vote NO if you are in favor of the current legislation provides that.

Question No. 4. Referendum such failure (green card).
The question relates to the repeal of the law April 7, 2010, No 51 in respect of such failure of the Prime Ministers and Ministers to appear in criminal court. We must vote YES 'if you is contrary to the principle that Prime Minister or Ministers may decide not to appear in court in the processes that affect them. We must vote NO if you are in favor of the current legislation provides that this "shield" against the justice system.

It 'important to know that you can choose which referendum vote, withdrawing only the contacts that are interested. Quorum is in fact calculated for each question.

I HOPE THIS IS THE RIGHT TIME TO BE FREE FROM THIS GOVERNMENT BECAUSE WE REALLY NEED TO CHANGE IN ITALY, FOR THE JOBS AND UNIVERSITY BECAUSE WITH THIS...THINGS ARE GETTING WORST...BERLUSCONI RISK TO RUIN SERIOUSLY ITALY

I HAVE PUT YES TO ALL 4 QUESTIONS ESPECIALLY AT THE QUESTIONS OF THE WATER, BECAUSE NOBODY I THINK CAN TO EARN MONEY WITH THAT, AND THE NUCLEAR THAT I THINK IS VERY DANGEROUS...BERLUSCONI IF LOOSE THIS REFERENDUM CAN TO BACK AT HOME

Posted by Unknown at 15:47 Nessun commento: 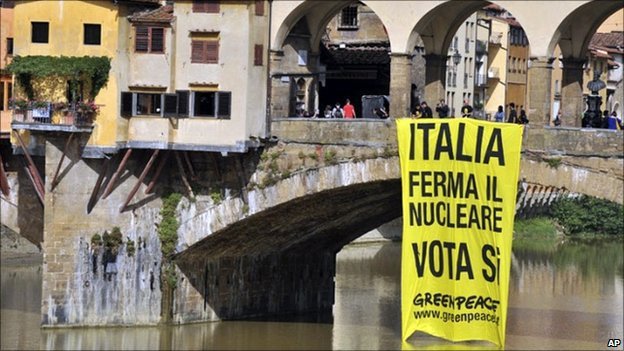 In Italy, Yes can mean No.

So it is with nuclear power, at least for some people.

This weekend, Italians will take part in a referendum to decide whether they want to say, "Nuclear, no thanks," or to embrace it as a power source of the future.

Somewhat awkwardly for voters, the question on the ballot paper is phrased as a negative. So to vote against nuclear energy, they have to tick Yes on the referendum.

Hence, Yes means No. The No campaigners are confident that their time has come.

After years battling what they thought were the insurmountable forces of government and business intent on taking Italy into the nuclear world, the mood, the tide, the direction appears to have changed in their direction.

Why? In a word: Fukushima.

The Japanese nuclear disaster has concentrated once-hesitant minds and created what looks like a global shift away from nuclear power, at least for now. 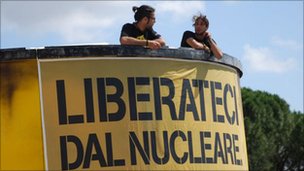 For years, Italy's anti-nuclear movement has been seen as outdated and irrelevant

Germany's atomic exit has been the biggest move, so far.

It recently announced that all of its nuclear power plants will be phased out by 2022.

Now Italy is voting on it and the polls show a clear majority in favour of going the same way.

It will not be the first time - this is the country's second nuclear referendum.

In 1987, shortly after the Chernobyl disaster, Italy voted to close all existing nuclear power stations.

For more than 20 years it has been the only major European Union country without its own nuclear energy industry.

It has relied, instead, on imported supplies - oil from Libya, natural gas from the Gulf and hydro-electric power from Alpine neighbours to the north.

But Prime Minister Silvio Berlusconi decided that was not a sound strategy, so he resolved to go back to the future by rekindling the old nuclear programme.

A year ago, the government passed a law to re-start it.

Deals and contracts were lined up with the French and others to begin building new plants.

Objections were intolerable; the process seemed unstoppable, until the tsunami.

Almost immediately, the government realised it could not simply carry on as planned.

It pressed the pause button, putting nuclear plans on hold for a year. 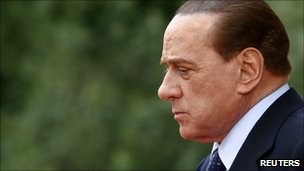 The referendum is turning into a confidence vote on Silvio Berlusconi

It then tried to stop the planned referendum, using the courts to block it.

But it failed, not least, says Greenpeace, because a year-long delay was not anything like enough to meet public fears and concerns.

"It's dirty, dangerous and expensive. Fukushima changed people's minds, but they already knew that other forms of renewable energy supplies were the only way forward," he says.

In the current climate of nuclear neurosis, it can be hard to find people to stand up and make the argument for nuclear power.

But we went to the business community, for its take on the energy/safety/cost equation.

At the Aero Sekur company, south of Rome, they make everything for aviation safety - from parachute repairs to giant airbags for helicopters ditching on water.

What they crave, apart from safe products, is secure energy supplies.

"Only nuclear power can provide that certainty. Wind, sun and other renewables are important, but they can never match the demands of industry, in particular. They're only ever going to be marginal players."

In Italy, these days, almost every test of public opinion appears to end up as a check on Silvio Berlusconi's popularity.

And so it is with the nuclear referendum.

Political opponents are using it to undermine, weaken and humiliate the prime minister, equating the calamity of his private life with the toxicity of the nuclear debate.

Strangely, for the usually effusive Mr Berlusconi, there has been uncharacteristic silence on the subject.

But, as an astute politician, he knows that in the aftermath of Fukushima, there is no point in trying to flag up one of his flagship policies.

The result could well depend on turnout. To be valid, it needs a turnout of 50% plus one - that is around 27 million Italians.

Such is the attention being given to the referendum on all media platforms that that may well be a realistic outcome.

Italy could be about to turn its back, again, on nuclear power.

For those advocates of its benefits, that would create unnecessary doubt about future energy sources.

But for those opposed, it would bring victory after years of often unfashionable protest against a source of power that they believe is unsafe, un-needed and unwelcome.

More on This Story

TIME FOR BERLUSCONI TO STEP DOWN

Posted by Unknown at 13:45 Nessun commento:

Posted by Unknown at 11:17 Nessun commento:

Ligabue - I Ragazzi sono in Giro 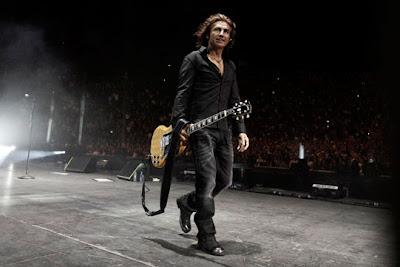 Posted by Unknown at 10:18 Nessun commento: 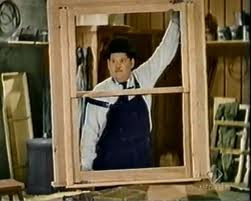 Posted by Unknown at 08:37 Nessun commento: 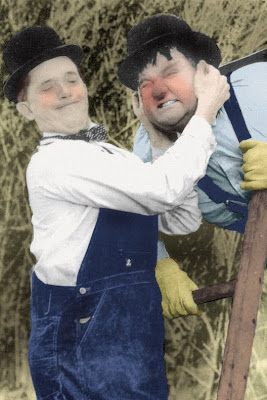 Posted by Unknown at 08:28 Nessun commento: 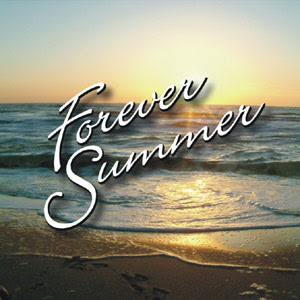 Posted by Unknown at 04:45 Nessun commento: 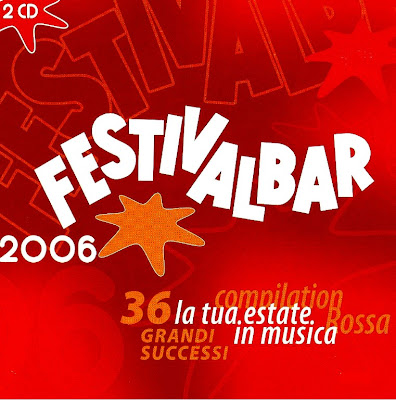 Posted by Unknown at 03:52 Nessun commento: