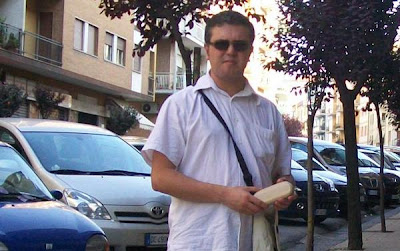 MY GOD MY GOD WHAT BAD NEW FOR THIS FAMILY

for that family discovery that their relative is die during that damn war...i remember also many italians pilots that has bombing iraq in 1991 together british and americans are die...bad memory i was a kid and very scared from that war...
Identified at last: the first US soldier killed during 1991 Gulf War

THE UNITED STATES government has identified the remains of the first US soldier to die in Iraq during the 1991 Gulf War.
Thanks to a tip-off from an Iraqi citizen, the Pentagon has finally discovered where Captain Michael "Scott" Speicher was buried by Bedouin tribesmen, more than 18 years after his F/A-18 Hornet fighter jet was shot down in the desert.
ADVERTISEMENTts and skeletal remains were recovered in the desert last week by US Marines stationed in Anbar province. They were identified as Capt Speicher's remains from dental records.
The Hornet fighter was shot down on 17 January, 1991, the first night of the first Gulf War. The Iraqi government maintained from the start that Capt Speicher died in the crash, although the fact his remains had gone unrecovered fuelled multiple conspiracy theories.
Some believed Capt Speicher, 33, had survived his shoot-down by ejecting from the plane, but been taken prisoner by Saddam Hussein's henchmen.
On 11 January, 2001, Capt Speicher's status was changed from "killed in action" to "missing in action". According to documents released in March 2001, this was because US intelligence community had concluded that Baghdad could account for the pilot's fate, but was concealing information.
President George W Bush cited Capt Speicher's possible detention as part of his case for post-9/11 action against Iraq, along with allegations that Saddam was developing banned weapons of mass destruction and was sponsoring terrorism.
The US-led invasion of Iraq in 2003 gave investigators the chance to search inside the country. That led to a number of leads, including the discovery of what some believed were the initials "MSS" scratched into the wall of an Iraqi prison.
The Iraqi who told marines about the remains said that he knew of two Iraqi citizens who recalled a US jet crashing in the desert. One said he had been present when Capt Speicher was found dead at the site and buried there by Bedouin tribesmen.
The Iraqis led the marines to the crash site.
"Positive identification was made by comparing Capt Speicher's dental records with the jawbone recovered at the site," a Pentagon statement said.
Admiral Gary Roughead, chief of naval operations, said: "Our navy will never give up looking for a shipmate, regardless of how long or how difficult that search may be. We owe a tremendous debt of gratitude to Capt Speicher and his family for the sacrifice they have made for our nation and the example of strength they have set for all of us."
A spokeswoman for Capt Speicher's family, from Jacksonville, Florida, said relatives learned on Saturday that his remains had been found.
Cindy Laquidara said: "The family is proud of the way the defence department continued on with our request to not abandon the search. We will be bringing him home."
Senator Bill Nelson, a Florida Democrat, has campaigned for the military to renew the search, and he once visited the Baghdad cell where it was thought that Capt Speicher may have carved his initials in the wall.
He said: "We all clung to the slim hope that Scott was still alive and would one day come home to his family."

that asshole of bush senior...he has order that war...HIS the responsibility of THE DEATH OF THAT boy
DOESN'T MATTER IF IS AN AMERICAN, A BRITISH, A GERMAN, A FRENCH, AN ITALIAN....A BOY DEAD IS ONLY A GRAVE TO CRY FOR HIS FAMILY
http://www.youtube.com/watch?v=tJGs2BDKq5g&feature=related
Posted by Unknown at 09:52 Nessun commento: