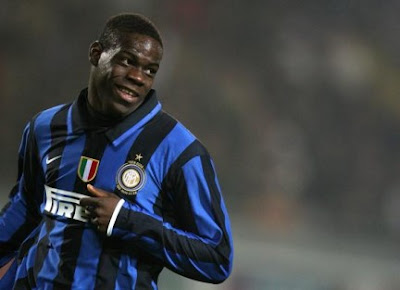 The success of Inter against Barcelona is stained by the rupture between the public of Meazza and Mario Balotelli that the final whistle was taken off his shirt and threw it on the ground heading straight in the locker room without celebrating with friends, avoiding the manager Gabriel Oriali who tried to calm him. Entering the final game, Balotelli has reacted angrily to the boos of the public Inter played for a couple of wrong. The attacker has indicated all the bastions of the Meazza muttering to himself and was useless trying to Eto'o to placate the public protest.


Bad scene then in the garage, as shown by the cameras of Sky. A group of fans (presumably 'celebrities' who had access to the area) managed to enter the garage area of the stadium, tried to attack Mario Balotelli, which very barely managed to reach his car. In defense of his players spoke President Moratti, who gave a slap to the player to cheer
Conduct which does not like it one bit at Mourinho. "I'm for Inter since July 2009 - said the Portuguese coach to the microphones of RAI - and remember all the 'ball' I came to try to educate footballing talent, all these enlightened, and now I see a very bad thing happen in a semifinal of the Champions League, the second most important game of football in Europe. "

"The gesture of Balotelli? Bad, very bad. " So the CEO of Inter, Ernesto Paolillo, said the gesture of annoyance that the Inter striker has had during the match between Inter Milan and Barcelona Champions. "It's one thing on which we must discuss," said Paolillo. "Take action? Absolutely, "he concluded with Inter.

Posted by Unknown at 15:57 Nessun commento: