he has suffer the world war 2 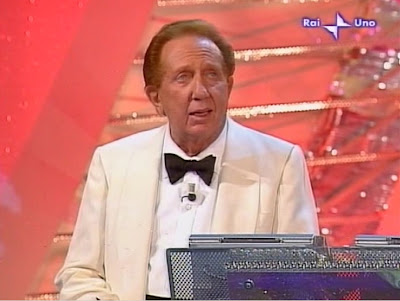 Michael Nicholas Salvatore Bongiorno, known as Mike Bongiorno (pronounced /ˈmaɪk bonˈdʒɔrno/; May 26, 1924 – September 8, 2009) was an American-born naturalized Italian television host. He started his career on Italian TV in the 1950s and was considered one of the most popular hosts in Italian TV. He was also known with his nickname il Re del Quiz (The Quiz King), and the pecularity of starting all his shows with his trademark greeting: "Allegria!" ("Cheers!").
Bongiorno was born in New York City, United States but moved to Turin, his mother's home city, early in life. During World War II he abandoned his studies and joined a group of Italian partisans. He was captured and spent seven months in the San Vittore prison in Milan and was then deported to a German concentration camp. He was liberated before the end of the war due to a POW exchange between the United States and Germany. He returned to New York and in 1946 started work at the radio headquarters of Il progresso italo-americano (The Italian-American progress) newspaper.
Bongiorno returned to Italy in 1953. He appeared in the program Arrivi e Partenze (Arrivals and Departures) on the TV channel RAI on the very first day of official public TV transmissions in Italy. From 1955 to 1959 he hosted the quiz show Lascia o Raddoppia?, the Italian version of The $64,000 Question. This was the first successful quiz show on Italian TV, and became one of the most famous Italian TV programs ever[citation needed].
Another successful program was Campanile Sera (Bell Tower Evening, 1959-1962), in which a southern Italian town and a northern one challenged each other with questions made to representatives of the two towns who were present in the studio and practical games played by citizens situated at the same towns.
In 1963 Umberto Eco wrote an essay on Mike Bongiorno and his way of communicating named Fenomenologia di Mike Bongiorno.
Beginning in 1963 he hosted eleven editions of the Sanremo Festival. Then he hosted the quiz programs Caccia al numero (Number Hunting, 1962), La Fiera dei Sogni (Dream Fair, 1962-1965) and Giochi in Famiglia (Games in Family, 1966-1969). But the greatest success came with the quiz program Rischiatutto (1970-1974), an adapted Italian version of Jeopardy!, with 20 to 30 million watchers every Thursday night, the highest audience in the history of Italian TV. Other programs hosted by Bongiorno were the current events talk show Ieri e Oggi (Yesterday and Today, 1976) and the quiz programs Scommettiamo? (Wanna Bet?, 1976-1978), inspired by horse-racing, and a remake of Lascia o Raddoppia? in 1979.
He moved to Tele Milano (now Canale 5), one of the first Italian commercial TV channels owned by Mediaset whose owner is Silvio Berlusconi, to host I sogni nel cassetto (The unrealized dreams, literally "The dreams in the drawer", 1979-1980). After a brief return to RAI with the news-game Flash (1980-1982), he continued working for Mediaset quiz programmes Bis (1981-1990), Superflash (1982-1985), Pentathlon (1985-1987), Telemike (1987-1992), Tris (1990-1991), the statistic game Tutti per uno (Everyone for one, 1992) and from 1989 to 2003 La Ruota della Fortuna (the quiz which was imported in the States and other countries with the name of the Wheel of Fortune).
From 1991 to 2001 he hosted Bravo Bravissimo (Good, very good), a very successful festival aimed to under 13 years-old musicians, dancers and singers from all the world. He won 24 Telegatto, the Italian TV prize, and on May 26, 2004, in occasion of his 80th birthday, he was appointed Grand Official of the Order of Merit of the Italian Republic by the then Italian President Carlo Azeglio Ciampi.
Until 2005 he hosted Genius on Rete 4, an afternoon quiz show aimed at 12 to 14 year-olds. In 2006 and 2007 he hosted the prime-time quiz show Il Migliore (The Best) on Rete 4. More recently, he was also a guest of the second episode of the Gianfranco Funari's show Apocalypse Show on Rai Uno. On December 2007, Mike Bongiorno was made Doctor Honoris Causa [1]. On 26 March 2009 Bongiorno signed for SKY Italia after Mediaset decided not to renew his contract, and had planned to host a new TV show on SKY Uno due to air in fall 2009.
On September 8, 2009 SKY Italia announced Mike Bongiorno had died in Monte Carlo due to heart failure.[
Posted by Unknown at 09:29 Nessun commento:

a great anchorman of the italian tv today is dead 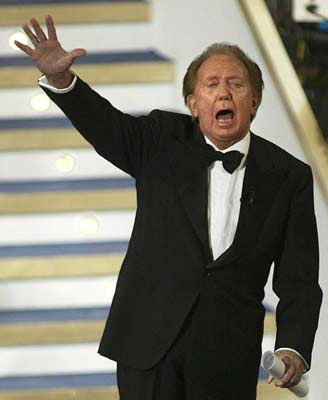